And now for something completely different! no. 6. The Shell.  I always wanted to draw this shell, I've had it for 24 years and never got around to it. I first found it in the house we lived in when we moved to Gardenstown, Scotland in 1989. It was left there by the artist that lived in the house before me. I kept it all these years and it always sat in the windowsill wherever we moved to. When I moved back to England last year I left it behind but my daughter recently returned back home and brought it back as a study object for her current project at art college.....so it seemed worthy of drawing.

It was a bit ambitious to attempt it in such a short time frame because it's quite complicated and full of strange worm casts inside the shell. So I rushed it a little and couldn't finish it but I'll definitely draw it again when I have more time. Not a great photograph as it's late now and difficult to capture in poor light. 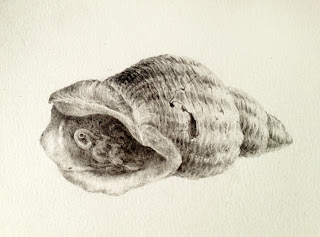