Last week I travelled by road to Austria and Switzerland via France, Belgium, Holland and Germany....it was a long way! But the opportunity to paint the flowers on this trip was too good to miss. It's a long time since I've painted wild flowers and I'd forgotten that it can present quite a challenge.... and when the weather is wet it's near on impossible at times! Nevertheless I managed to produce some sketchbook studies and notes and took lots and lots of photographs. There's a whole heap of material from my trip so will spit it into two blog posts. Next week I'll focus on the mixed study pages but first off I'm dedicating this post to common Toadflax. It's a pretty common plant but it's an old favourite of mine so I make no apologies for getting carried away with it.....sometimes the story behind a plant makes a plant too tempting!
The reason I couldn't resist Linaria vulgaris was sentimental, having grown it in my garden in Scotland some years ago, I'd been given a young plant from Aberdeen University Botanic Garden where I worked in 2005. Although I'd written about and it had flourished in the garden, I'd never actually painted it - so it was nice to encounter it again in Germany, Austria and Switzerland, where it can be seen at almost every road verge at lower altitude. Initially and visually it wasn't a plant I was particularly interested in painting but the history of the plant really is fascinating and it became  more interesting as I studied it. I first learned about L.vulgaris when I chose to write and essay about floral mutations for an assignment about Carl Linnaeus, to celebrate the tercentenary of his birth - this task was part of a course I undertook with Uppsala University in 2007. The University provide some great resources on Linnaeus for anyone interested.

Carl Linnaeus had a particular interest in L. vulgaris because it is prone to a strange mutation which he first described over 250 years ago. A mutated form occurs on occasion, and the plant produces radially symmetrical  flowers with five spurs instead of the usual bilateral flowers, which have just one spur.
Apparently Linnaeus was so captivated by the plant and the mutation that he grew it by his front door at his summer home in Hammarby for many years. He had originally been presented with the 5 spurred mutated version in 1742 by a young botanist, Magnus Zioberg and went on to write a thesis describing the mutated plant in 1744.
Linnaeus placed the mutated plant in a separate classification from L. vulgaris and named it  'Peloria' which translated in Greek to 'Monster'. He could only conclude that the 'Monster' was an example of hybridisation which resulted from interbreeding between two separate species and suggested common toadflax and some other unknown species had interbred to create a new species. This controversial view challenged the religious views of the time and presented Linnaeus with a problem which left him in conflict with the church. The problem of conflict persisted for him as he developed his sexual system and classification of plants, which were seen to question God as the creator. Linnaeus's work was banned and ordered to be burned by by Pope Clement the XIII and he was accused of impiety by the Lutheran Archbishop of Uppsala.
L. vulgaris has continued to fascinate and has been discussed in works by numerous evolutionary biologists, including Darwin, de Vries and Huxley, and used as an example of how mutation can lead to changes in morphology.  Read more about Linnaeus's Peloria .
The mutation is now known to be caused by a single gene mutation. Linnaeus was wrong because L. vugaris was not a separate species but the principle he identified was an important one in evolutionary biology and the L. vulgaris research continues to this day.
The study page, Linaria vulgaris I worked on 14 x 10 inch Langton extra smooth HP paper ( kept in a plastic bag!)
I also had a small notebook for listing species and notes.
Although its only a study page I still prefer to create a well balanced page so try to fill the space as evenly as possible. This usually happens fairly naturally as a rule. Just make sure nothing is too cramped or far apart.
Back to the Travels
After many hours of travel and an overnight stop in Germany we finally arrived in Kappl, a small village in the Paznaun valley, Province of Tyrol, Austria. Kappl is located over 1,250 m above sea level, the clouds roll through the mountains and the air feels incredibly clean.   As we climbed the winding roads a far greater diversity of flowers was immediately apparent. Many of the plants commonly seen can be found here in the UK but seldom is there such diversity in one small area. In my next post I will share the mixed study pages from Kappl and St Moritz. 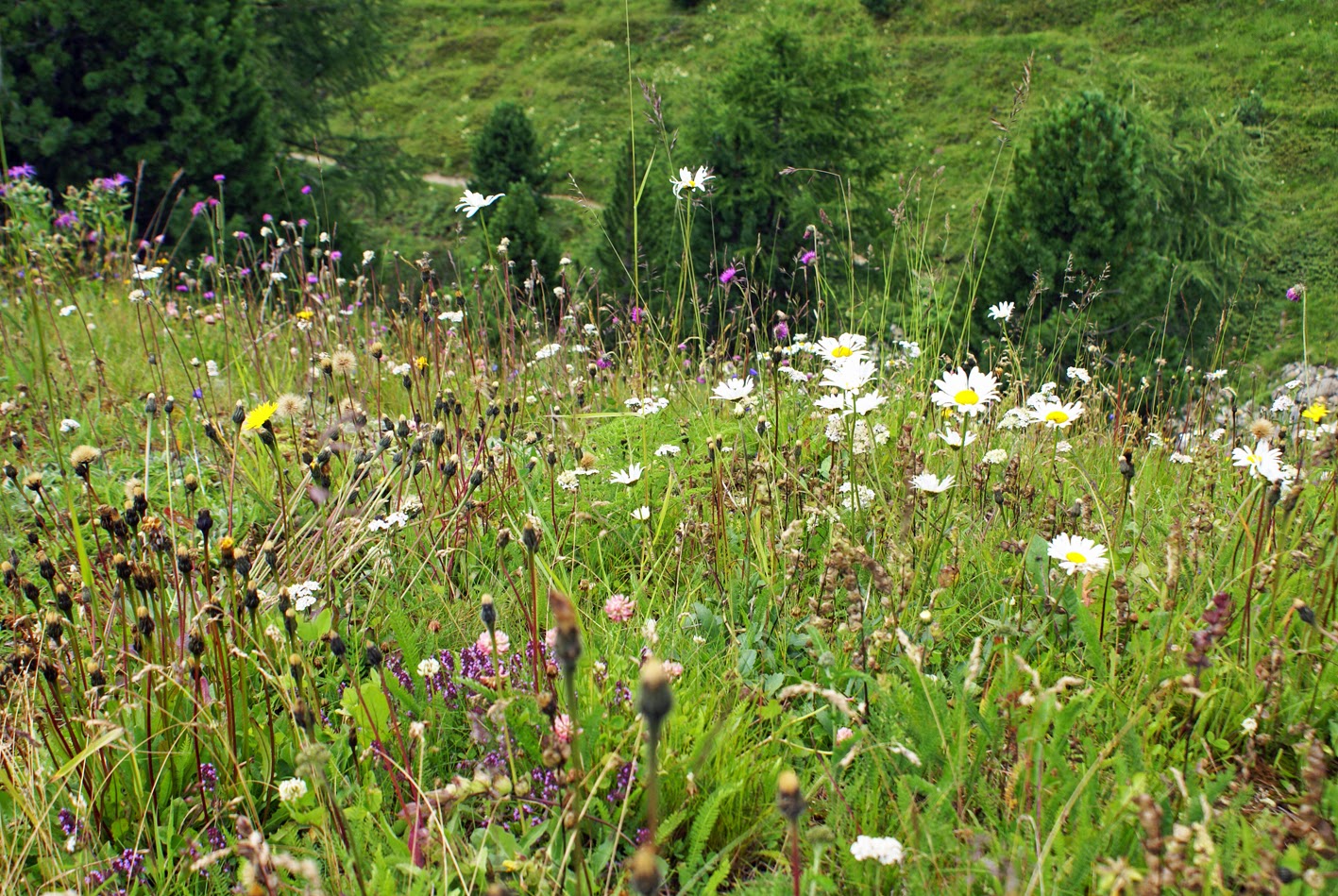 Posted by Dianne Sutherland at 10:14