Several years ago Dr Evelyn Stevens, co-founder of the Meconopsis Group, gifted me some seeds for a cross pollination experiment. I raised a fairly large number of Meconopsis plants but far too many for my small garden, so passed on a number to the Cruickshank Botanic Garden at the University of Aberdeen, keeping just a small number at home. I've been trying to get around to painting them for the past 3 years - a few weeks ago I finally made a start, although in fairness it had taken 3 years prior to this to produce any flowers and some still refuse to flower! Anyway so much time has passed that one of the plants has recently been reclassified! (see description below)
Here is just one of the preparatory watercolours towards the series of Meconopsis paintings. They're quite tricky because the colour of the petals changes so quickly with age. The final pieces will probably be painted on vellum.....but that will have to wait until next year. 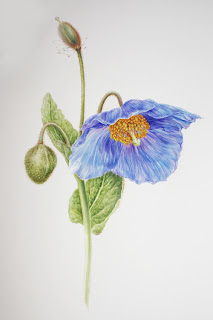 However,  it was discovered that a similar plant had been previously been discovered, in 1886, by Pere Delavay in NW Yunnan. This plant was described and named, M. Betonicifolia in 1889. It was not introduced into cultivation. When George Taylor published his monograph of the genus in 1934, he maintained that the two taxa, were conspecific, therefore the name M. betonicifolia had priority having been published at the earlier date, thus, M. baileyi became a synonym.

In June 2009, Dr Chris Grey-Wilson, of Kew,  published a paper in The Alpine Gardener which identified more than 8 distinct features that justify separation of the two taxa, as a result the original two species were reinstated. M. betonicifolia endemic to NW Yunnan and M. baileyi endemic to SE Tibet. You can read more about the history and classification on the Meconopsis Group website.
Posted by Dianne Sutherland at 10:50